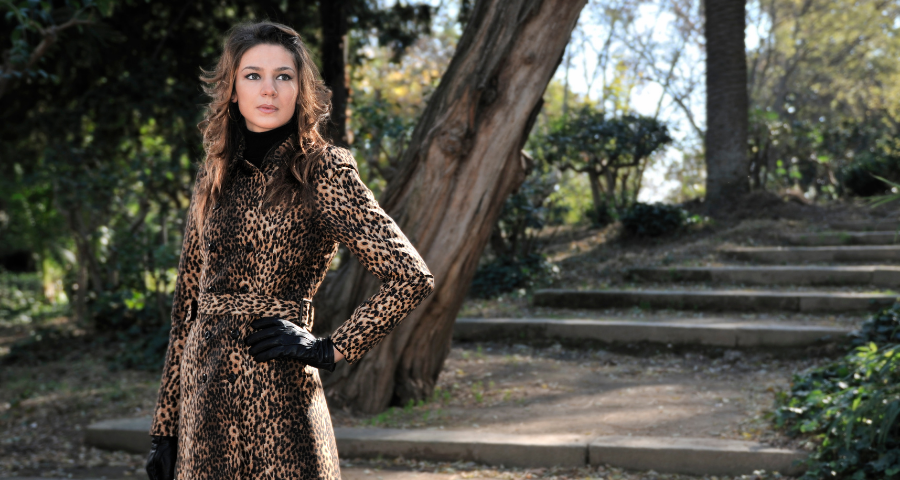 Animal print clothing is trending because of our love for nature and our abhorrence of real fur being worn. Few now desire to wear real fur but we all want to feel close to animals by wearing their patterns close to our skin or in possessing objects that remind us of animals. Particularly those in the wild that are free. As free as we would like to be sometimes. More often than not the animal clothing available will relate to wild animals that we admire for their strength and speed. These prints will empower women who want to feel stronger in a world that sometimes still seems to be dominated by men. The animal prints available include leopard, tiger, cheetah, zebra, giraffe, monkey, African wild dog, and striped hyena. There are surely more. This article, however, will focus on just four to give a view on why they are popular in the world of fashion.

In general, when used in female clothing, animal prints indicate confidence, independence, sexuality, and non-conformance. It can depend on the type of clothing or accessory that has been made out of the animal print. Men are less likely to consider wearing anything such as a leopard print unless they want to shock. A rock star might perhaps consider it as part of their stage act or to stand out from the crowd.

Possibly the most popular in the animal print line of clothing is the leopard print. In popularity, it has stood the test of time. It was popular throughout the majority of the 20th century and remains popular today. Coronation Street star Julie Goodyear would wear it behind the bar while playing landlady Bet Lynch. It is experiencing a resurgence in terms of its popularity in the 2020s.

The majority of leopards are light in color and have dark spots on their fur. This makes for a striking pattern to wear. Symbolically, they are fast felines capable of running up to 58km/h. Then, they do not have to run in heels. If worn on a date, therefore, leopard skin could be seen to suggest that someone is difficult to keep up with. That the lady wearing them has plenty of energy and someone who likes parties where things move quickly. This is only a thought, of course.

The distinct difference between leopards and cheetahs in terms of their coloration is the arrangement of their spots. Like a leopard, a cheetah never changes its spots, so you will know what to expect from the look of the material. So, then, leopards spots you will find are black with a brown center, whereas the cheetah’s spots are solid black. It depends on which look you prefer. If you desire a more minimal pattern, then go for the cheetah pattern. Sometimes simplicity is preferred, although never on a date, presumably.

As a tall animal, it would rather be in-keeping if the lady wearing this animal print was also tall. That is tall without heels on, not tall by artificial creation. A giraffe, for being tall, is considered a majestic animal. It is also tall for a reason that nature intended. So that it can reach the high trees to eat. It is an example of a beautiful creature that has evolved out of survival. So, if you are a survivor, then go for a giraffe print and look beautiful wearing it. The material will be different from either a leopard or cheetah print. If you prefer no black or brown spots then you will lose them when you choose a giraffe pattern instead. It will represent a more unusual choice for a night out.

Finally, let us consider monkey prints.  We all have a cheeky side, and so do monkeys. Why not bring out our fun side by wearing a monkey print?

Interestingly, there are 260 different types of monkeys, so that will provide you with a topic of conversation when meeting your friends wearing such an outfit, and also provide the answer to a potential question that might now be asked at the next pub quiz you attend.  So, the 260 different monkeys are then separated into two main categories: Old World and New World. The Old World monkeys live in Africa and Asia, while the New World monkeys live in the Americas. So, some more facts there for your pub quiz.

Whether your top, your long dress, the high heels that you have worn for most of the evening, or your handbag, are made from a material resembling the pattern of an animal’s skins, there are plenty of animals for you to choose from. The wearing of animal print clothing certainly creates a statement and gets you noticed. It is also a mark of being a strong woman who knows what she wants. That may be where the definition of cougar comes from, who knows. These prints are hopefully seen as a much more environmentally pleasing option when compared to real fur, which is not permitted to be sold now in many parts of the world. Long may faux animal skin be available in its different forms to bring out the animal instincts in the female of the species.