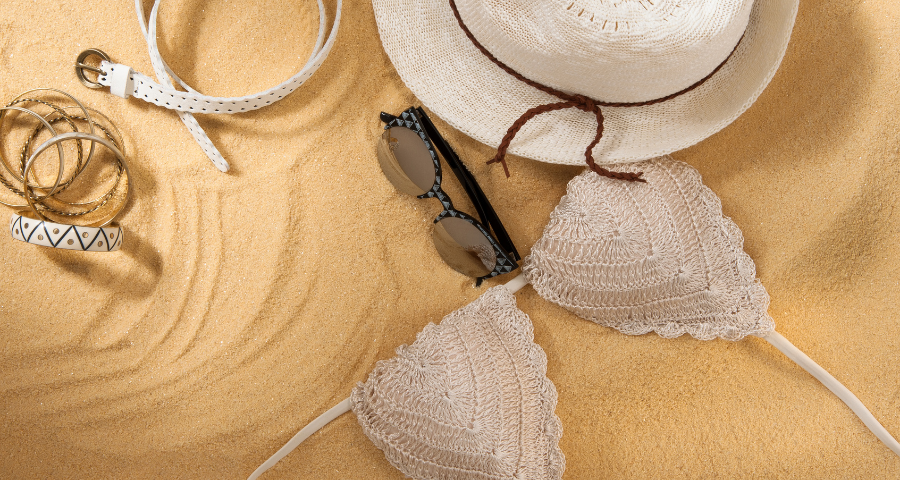 When it comes to beachwear, we would indeed wear things on a beach that we would not consider wearing elsewhere. Conversely, there will be items that have transferred from the beach that we now wear when wanting to look more casual or to feel that summer has arrived.

This article will explore just what we do wear that makes us think of the beach or indeed would be considered more appropriate for that kind of environment.

A bikini is just a more colorful version of underwear. We, however, seem to get away with wearing it outdoors and without clothes on top because of this. Bikinis can be found as a one-piece or two-piece combination, that will usually match in colour and design. A one-piece option these days would seem to be more for the convenience of pulling it on and off quickly. Another reason might be to obtain more of a suntan on the area that the one-piece bikini might otherwise have covered.

In 1946, Jacques Heim, a Parisian designer, introduced a two-piece swimsuit that he named the Atome (‘Atom’) and advertised as “the smallest swimsuit in the world”.  Then, in July of the same year, Louis Réard would introduce a smaller design. The popularity of bikinis grew in 1960s America. The bikini would become accepted, and indeed received more exposure, when seen being worn by film stars Raquel Welch, Brigitte Bardot, and Ursula Andress of James Bond movie fame. For others to see the photographs and footage of them being worn on public beaches and in films was to encourage the wearing of them. Bikinis have remained popular as beachwear and a sign that it is warm. For this reason, they create a pleasing sight to see for either gender.

Flip-Flops are primarily a beach version of a sandal. Although designer ones are made, they are considered cheap and disposable. So, should you lose one on the beach, you do not have to spend much money replacing it. They are waterproof and so ideal for paddling in.

With regards to who invented the flip-flop, this style of footwear was worn by the ancient Egyptians in 1,500 B.C., so there is nothing new about them. In the US, the flip-flop descends from soldiers bringing them back from Japan, making them popular after World War II.

Three-quarter length shorts have become popular beachwear in more recent years. This is no doubt because they can double up as suitable wear for on the beach and then off it when shopping around the town of a seaside resort.

The invention of these shorts is attributable to Bermudian native tea shop owner Nathaniel Coxon. In 1914, he would hem the uniform pants (trousers if we are reading this in the UK) of his employees so that they were more comfortable working in the heat. The British Army, who were stationed in Bermuda during World War I, also adopted these shorts to wear in the desert and when faced with tropical climates.

So, three items that you would find on a beach and also elsewhere. They have origins that date back years, which is something that we can be thinking about when we wear them and enjoy the hot weather that will surely accompany our choice of wear unless we are being brave. I have for, instance, seen postal workers delivering mail in shorts when surely the temperate warranted full-length trousers. But then, it does depend on the physical activity that is keeping you warm while you are wearing the particular item from the above list. It should be noted, though, that while you might run in Bermuda shorts, it would not be wise to do that in Flip-Flops, or you might find yourself some distance ahead of them.